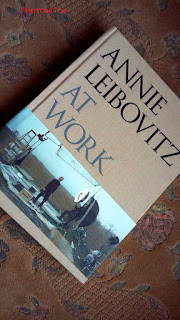 A while a go I was reading one of Tim Clinch's articles, in it he suggested that If you were thinking about becoming a professional photographer you should read Annie Leibovitz at work as he considered it a must. This prompted me to re-read it. Being well written, it is easy going taking me no time at all to get through it.

When Annie was young she was obsessed with making pictures so much so it was impossible for her to leave the house without a camera. Annie learned later in life that it was OK not to have a camera in front of her face all the time and that some images should remain untaken.

Annie Leibovitz started as a photo journalist progressing to commercial and magazine work. The latter requiring a different approach which she had trouble adapting to. This was because she liked the spontaneity of photo journalism's, capturing the moment rather than having to make up images to fulfill a brief. 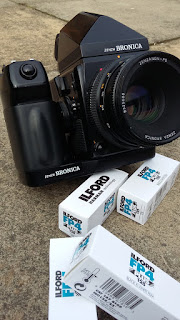 One of the things that struck a cord with me was the way she used her medium format camera, she suggested it was unorthodox to hand hold and move about the way you use 35mm. I have always used my Bronica SQAi hand held in the way she mentioned. I have never considered it to be unusual. Thinking on it, my Bronica has been swung through the air unsupported from the first day I picked it up. It has been held at arms length above my head to make a picture over the heads of a crowd and out over the side of a bridge to look down on its side at arm length so I can frame the picture. It has been up mountains, round lakes, along coasts and beach's, through cities and on long walks across country. All without the sight of a tripod. Admittedly by the end of the day my arms feel like I have been weight lifting - more so since I fitted a motor-drive to get round a problem and added an eye level viewfinder. What I'm getting at is it is OK to read and take note of what others do but do not let it stop you thinking outside the box.

The Broni maybe my favourite camera to make images with, but sometimes I long for days past when life was less weighty and the camera was a Nikon FM.

Posted by Mitch fusco at 16:00 No comments: Links to this post