One shot developers do what they say on the box! They are for single use and have a quality advantage over reusable ones, also removing the worries about usability. I know this may sound wasteful in these times of rising prices, but what cost do you apply for peace of mind when developing those precious negatives.

In most cases these days most developers can be used as single shot, in the case of PMK Pyro and RO9 it is the only way.
Posted by Mitch fusco at 17:19 No comments:

What does developer do?

The function of the developer is to bring out the latent image held in the emulsion. This is achieved by a chemical reaction, acting on the silver, producing dark areas where it is light and bright areas where there is shadow. The negative is reversed later with the print. The two most important things to keep at the front of your mind are: the development time and the temperature. It is these two factors that ensure the ultimate image quality you later produce in the print. Too short a development time will produce too thin a negative, like wise too long a process time will make the negative too dence, leading to very short and very long print times.
Posted by Mitch fusco at 16:37 No comments:

The plastic Paterson type of spool can be difficult to load. A common problem is the little metal balls that grip the film get stuck. Dont try to force the film through, if you do it will kink the negative leaving a half-moon shape. It can make the frame(s) useless. You will need to part the spiral and start again. A pain I know! Be gentle when removing the film, there is a chance of damage.


Damp or wet spool will not load, so make sure it is completely dry before use. Sweaty, damp or sticky fingers will make it difficult as well.


A too tightly rolled up 35mm film in its cassette can take a set that makes it tricky to load. So when rewinding the film back into the case dont over wind it after you hear it has released itself from the camera spool. With practice it is possible to leave a little bit of the leader poking out.
Posted by Mitch fusco at 16:33 No comments:

Reciprocity How it may affect monochrome film


The formula E=IxT expresses reciprocal relationship between the intensity of light reaching the film and the time allowed to act on the film. If one increases the other decreases proportionally, no net change in exposure occurs.


At long exposures this law breaks down, known as reciprocity failure. It is where a seconds worth of light is not enough to satisfactorily produce the required densities in the negative. So the longer the exposure the greater the compensation needs to be. With these exaggerated times comes a side effect in that the lower values recorded become under exposed more than the higher ones causing the contrast of the negative to increase. You can make adjustment for this when developing the film by a reduction of ten percent for up to ten seconds, from ten seconds by twenty percent and from a hundred seconds by thirty percent. These changes are easy to control for single frame exposure made with large format cameras but a little difficult to achieve with roll film. If all the frames on the film are exposed for no longer than ten seconds then the ten percent reduction will control the increase in contrast across the whole film, but in practice this is not always the case with exposure times being all over the place. I would suggest that a reduction of ten percent be the starting point and that with experimentation will find what works best for you. Having said all this the side effect of higher contrast maybe to your liking in which case where's the problem. 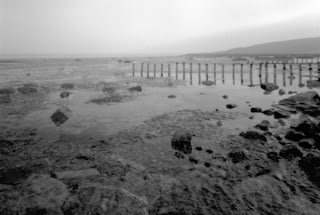 
The picture included in this post shows a slight increase in contrast. The negatives Ilford FP4+ were processed in PMK Pyro without an adjustment for increased contrast. Printed on grade two multi grade paper developed using Moersch 6 blue.
Posted by Mitch fusco at 16:15 No comments: