As I watched this video there were  flashes of  lightning and rumbles of thunder outside adding to the moving nature of this film. As a cooling wind rose, the plants in the garden swayed too and fro, combined with the pounding of rain drops on the window sill I gained a sense of what it may be like to have depression. To be making steady progress in the sun only to then be plunged into a dark desperate place with doom and gloom raining down on your head!

Some of the scenes in this film are stunning and worthy of a watch in their own right. If the message of the film strikes a cord all to the good.

This is the first time I've seen the workings of one of these machines. It is remarkable at how well and how quickly it produced the four little colour photographs using traditional C41 chemicals. It has all the darkroom action from the gentle agitation to allowing each solution to drip before moving on.

Apparently my brother in law used to service these machines and if he was doing one close to home My wife as a young girl used to get a free set as the machine needed to be tested to make sure it was working properly after he serviced it. 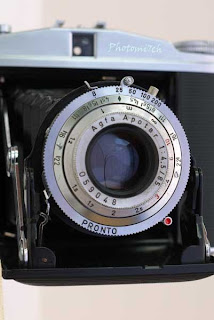 Carrying on from a previous post on the Agfa Isolette The opportunity to use the camera was provided by a break in the weather - it cleared enough not to be soaked as soon as you leave the house.

The flip out film holder makes it easy to load a new roll of film. There are in built springs that provide friction, so the film is kept tort, keeping it as flat as possible at the focal plane reducing distortion. The film back clicks shut with a reassuring clunk. It also has a little red window in the back with a sliding cover in which to view the film numbers as you wind on. The film is advanced with a knob on the top right hand side of the camera that has a built in reminder to wind on after each exposure otherwise the shutter will not set. 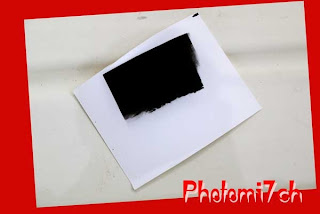 To reveal the lens you press a button on the top left hand side. In this case the lens followed by the bellows leaps forward from the front of the camera with an enthusiasm that can knock it out of your hands if you are not prepared for such athleticism. Once the front is open you are presented with the five main controls: lens focus, a full set of apertures from F4.5 all the way up to F32. A limited number of shutter speeds: B, 25th, 50th, 100th and 200th A self timer and most importantly a lever that primes the shutter for release. The only other thing present is a connection for flash. 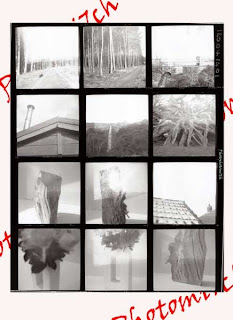 On the top of the camera is the shutter release that allows a remote cable to be fitted, a cold shoe for a range finder or other accessories and another knob that has four settings marked Col NK, NT, K and T. (I do not have a clue as to what they represent.) As far as I can tell it has had no affect on my negatives. It has a viewer and a tripod mount.


After I got used to the idea of guessing what the distance should be set to and then remembering to alter it for different views, I found myself taking shots quickly almost like an automatic. I did take light readings to start with but it became clear that the light levels were stable enough not to need checking for each shot. 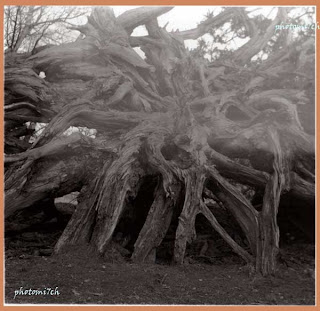 It became clear that there was a problem once the negatives had been developed. Some how light was getting into the camera. Having checked it carefully before hand I should have carried on and cut a piece of light sensitive paper to fit the camera and left it for a minute to make sure. Once the paper had been developed in the normal way it would have shown that light was leaking in from the bottom right corner of the exposure chamber indicating a problem with the bellows.


I'm a little disappointed with myself for not doing this check in the first place. If I had followed through with the test, I wouldn't have had a duff set of negs'!. It would have made an interesting set of prints as the gremlin's face in the tree roots shows.

This video predates the Alan Yentof documentary recently shown on the BBC ( it may still be available on i player)  by a couple of years. It indicates that the establishment were not sure how significant her works was. Alan Yentofs piece shows that the world has moved on.
Posted by Mitch fusco at 12:00 No comments: