I received an email from Harman technologies (Ilford products) recently about a new initiative that is to be launched worldwide.

The email was sent because I took part in a survey about darkroom use. It had a large response with fifteen thousand people taking part with over a thousand replies on the first day.

This is a summary of the statistics:

A second survey for privately owned darkrooms was done with thirteen hundred responses being received. They were asked if they would be willing to share their darkroom and 56% said yes.

With that encouraging result Harman have set up a new free online community www.localdarkroom.com They have already invited tutors and community/ public darkrooms to list themselves on the site. There is also a section for those that have a private darkroom who are willing to share their private space. You will need to be a member of the community to access any of these services, whether training or darkroom in the local area, as there has to be some sort of vetting when allowing people you do not know into your home. For FAQs and more information visit the web site.

I hope this venture is a success and praise Harman for their initiative. But from experience I note that there can be a big difference between what people say on a form and then taking part.

On a personal note I would have liked to open my darkroom to other enthusiasts but it is not practical at the present time.
Posted by Mitch fusco at 13:16 No comments: Links to this post

After my last post you maybe wondering if this is going to be saucy, you will have to read on to find out.

Paper flashing is divided into two types, 'pre' which is done before the negative is exposed to the paper and 'after' which is known as fogging. This article is going to deal mainly with the former as it is a good way of controlling the contrast of hard to print negatives and adding a finer quality to others. It is also the one I have used most often.

The first thing to do is explain how pre flashing works. All photo sensitive papers have a built in inertia to light, this means that the paper has to absorb a certain amount of white light before it starts to tone or show detail. When a paper has been pre flashed and the negative is exposed, all the light shining through produces tone and detail, because of this the amount of exposure needed is reduced, in some cases by 20%. This makes the lower values less likely to black out producing better separation in the shadows. It also affects the other end of tonal scale - the highlights, which receive more light, improving the detail and tone being recorded. With the inertia overcome, all the light passing through the negative is working on producing detail and tone. A consequence of this is a lowering of contrast making a finer balanced print.

Since flashing is a way of fine tuning contrast, it can be used to produce half grades with fixed or variable contrast papers. You do not have to flash to the maximum but can use it incrementally up to the point of tone. You do not have to flash a whole sheet of paper, it can be helpful where a sky in a scene is over blown to just flash that part of the paper. This is done by Dodging (holding back) with a piece of black card the other section of the paper preventing it from receiving any light. Remember that you should keep the card moving otherwise the final picture will have a black line going across it. Most negatives will not require flashing. If used inappropriately it can produce flat and unnaturally long toned prints. So be selective in your approach.

If you're a split grade printer you should not be afraid of pre flashing the paper as it has no adverse affect on this method, but can aid the production of better photographs.

Your enlarger and a reasonable accurate timer. For those who have the space you can set up a second enlarger just to do flashing or you can use a paper flasher by RH Designs.

How to Flash:
The main thing to note about flashing is the method you use has to be precisely duplicable so you can reproduce predictable results time and time again. One method is to set the enlarger light box at maximum height and close the lens down to minimum aperture (F16) with a timer connected, timing the segments at intervals.

For those who don't have a second enlarger things become a bit of a pain having to move the light box up and down like a yo-yo during the printing process. But there are ways round it. You can batch flash your paper keeping it in a separate box but only produce enough for that printing session. Secondly, find your own method of flashing which is what I have done. I move the light box to a height where the light from the lens covers an area larger than the paper I'm using, which is slightly higher than what I would use for printing (don't forget to make a note of the height for future reference). Set the lens to F8 and then time the segment at tenths of a second. You can increase the timing by closing down the lens. Don't be afraid to experiment to find a method to suit. You can do all this with the negative in the carrier and use a diffuser under the lens that scatters the image enough not to make an impression on the paper, but this can lead to overly long exposure times.

The method is the same as making a test strip for printing a negative. You need a strip of light sensitive paper and a piece of black card so you can expose sections incrementally. The only difference is you will need to mark the test strip with a pen so you can see how many segments have been exposed before the paper starts to tone. The paper is developed in the normal way. To check the test strip properly it needs to be totally dry to allow for dry down tones that may appear in segments that look clear when wet. You can force drying by using a hair dryer or the microwave. If you use several sorts of paper the test should be done for each and then stick the results to the front of the box for reference. It also means that each new box you purchase will need a test, as each new box is a different batch. 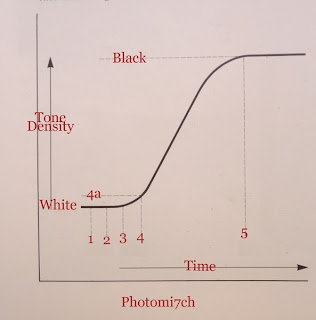 This simplified exposure curve shows what happens to photographic paper when introduced to white light. The lower part of the curve marked 1-3 is the area of 'inertia' when exposed for this short period of time and then developed there would be no change in the tone of the paper. When timed to 4 and developed there should  be the first signs of tone 4a. If you then time it to 5 at the top and develop it, it would be maximum black. (also known as D MAX) to add any more time after this point will not make the paper any blacker than black.
Flashing is about giving the paper just enough white light to get it to 3 before you expose the negative to extend the tonal range. Further white light from this point 3 is a different type of white light known as fogging.

Posted by Mitch fusco at 18:00 No comments: Links to this post

Is it a love affair? 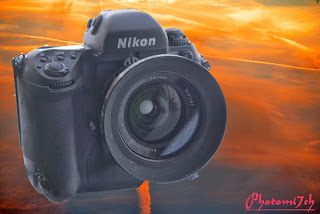 This is the saucy minx of an F5 that I use to take most of my photographs with, coupled with the sexy little prime of a 28 mm lens. Add a roll of Agfa APX to caress the back of the focal plane shutter and I'm in for a sensual day of picture making. 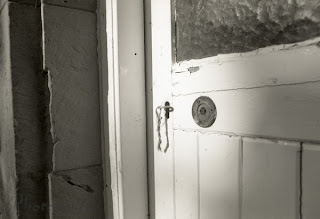 With camera in hand I stroll out into a bright day with a gentle heat, fanned by a breeze that shifts the leaves on the trees. Now looking at the image in the view finder that is alive with dancing shadows I wait with finger poised touching the trigger in growing anticipation, waiting, waiting for the right breath of wind to push the shadows into place to complete the composition the eye so lusts for. 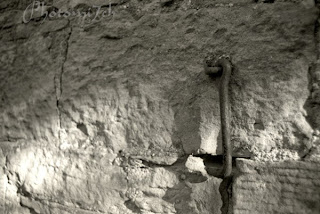 Click! anticipation spent, I turn away moving to the next flirtatious view to seduce my eye and so the day is flirted away click by click. Before I know where I am an entrancing morning has been teased away. 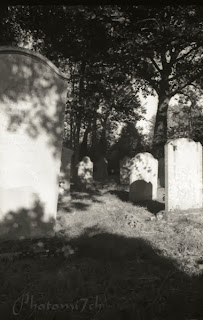 Not quite what I had in mind when I started writing this cheeky post but it does sex up the thought process behind the taking of each image made. A bit of fun at my expense. Believe it or not there was such a day and the pictures that illustrate this post are the results. A full days exposure and legal too!


Posted by Mitch fusco at 17:30 No comments: Links to this post

This video is about photographs who choose to use film. The pictures of their work alone should be enough to inspire you to use film.

I read a blog post recently that said the reason film was still alive is that most of the people who use it were over fifty and when they die off film will be a thing off the past. The one thing that stands out in this video is that not one of them is over fifty.

If you have an hour to spare you will not be disappointed by the photography.

Posted by Mitch fusco at 11:55 No comments: Links to this post

A recently developed set of negatives have shown themselves to be very contrasty even by my standards. During the summer I was on an early morning shoot, when I came across these scenes. They were not the easiest pictures to meter, there was a six stop difference between the light areas and the shadows in some cases. Two things drew me to them: the  way the shadows of the leaves danced on the walls in the gentle breeze and the other was a brief thought that they would be a challenge to split grade print.

It has been suggested that split grade printing works better when the contrast stakes are raised. In these cases they maybe unprintable. The pictures were made using 120 format FP4+ developed in ID11 for 14 mins I know this is longer than what is recommended but I have found I have a tendency to under expose when using medium format cameras.

I used Ilford multigrade developer and RC paper. I tend to use RC papers in the initial stages or until I'm happy that the picture warrants printing on FB paper.

I started the grade zero test print for the Gate but it became clear while I was doing the timed segments that I may not need a grade five test because  the contrast was very high even for zero. I chose sixteen seconds for the gate picture to illustrate the degree of contrast this negative has. The window shutter picture also proved to be overly contrasty as well. I was quite happy with the results until I did a second print with the grade five added which now makes the first print look soft. It just goes to show how things change when you start to explore the subject at different settings. None of the prints have been manipulated by dodging or burning in which could class them as the perfect prints?
Posted by Mitch fusco at 15:00 No comments: Links to this post