Fox Talbot was considered a polymath some of his interests and qualifications included Philosophy, Mathematics, Physics, Egyptology, Philology, Syrian, Chaldean cuneiform text and photography. Fox Talbot carried out his experiments at the family home which was Lacock Abbey Wiltshire.

The idea of photography came to Fox Talbot while he was on a family holiday at lake Como Italy. He was using a camera obscura and lucida to aid his fruitless attempts to sketch the lake ( Pictured right is a sketch drawn by Fox Talbot of lake Como using a camera obscura in October 1833) He put these devices to one side and thought back to a procedure he had used with a camera obscura that put an object on to a piece of paper attached to the back plate; this image did not last long it disappeared like a ghost in to the night. It was at this time that he thought it would be nice to fix the image permanently to the paper.

Fox Talbot started looking in earnest for a way to fix an image to paper in 1834; he would first have to find a paper that could be submerged in a solution of salt and silver nitrate without it disintegrating. The result of combining these two chemicals would make silver nitrate a light-sensitive salt that was not affected by the moisture in the paper. He now had a paper that could be used for photogenic drawing. The first pictures he produced were of leaves and lace. He placed these on a sheet of light-sensitive paper and put a sheet of glass over them, then left them out in the sun. 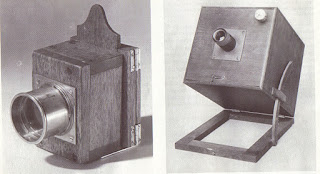 Fox Talbot used many different types of camera to produce his pictures. There we a couple of cameras or boxes that only measured two or three inches which Fox Talbot left around the grounds of Lacock Abby in different places with light-sensitive paper in for about an hour at a time. They were nick named mouse traps by the family. His early cameras would use telescope or microscope lenses.


This is the picture of the famous Oreil window in the south gallery of Lacock Abby. It is the earliest surviving paper negative dated 1835. when originally taken you could count the two hundred tiny pieces of glass that made up the window with the help of a lens. This is a replica of the camera he used to take the Oriel window shot. 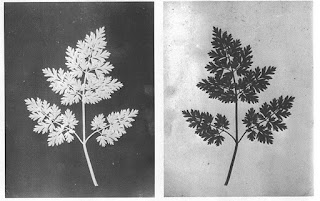 By chance in 1840 Fox Talbot discovered when re-sensitizing some paper that the image had appeared; this became known as the latent image. Before this time he was having trouble with the sensitivity of the papers. Although he had been able to fix the images by using a strong salt solution of potassium iodine of hypo to stop the images fading. This new discovery was a major break through that meant exposures could be achieved in one to three minutes instead of half hour or more. The year after Fox Talbot discovered how to make his photogenic drawing process more sensitive to light by adding gallic acid to the process. He also found that a further treatment of gallic acid and silver nitrate would bring the latent image out. It was time he changed the name of the process to calotype (from the Greek "Kalos" meaning beautiful) the calotype was a negative/positive process introduced in 1841. Strictly speaking calotype should have referred to the Positive part of the process. 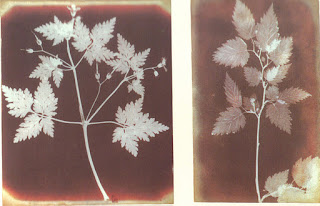 The advantages of the calotypes were unlimited prints from one negative, retouching could be done to the negative or print, the paper print was easier to see and could be handled with out damage and had warmer tones.

Some of the draw back of this process were that prints tended to fade; fibers in the paper reduced the quality of the print, making the focus soft but some people found this an advantage. Materials were less sensitive to light needing longer exposure. 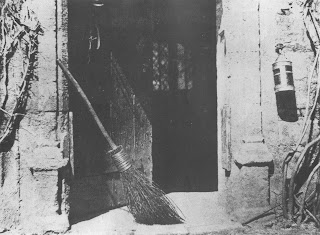