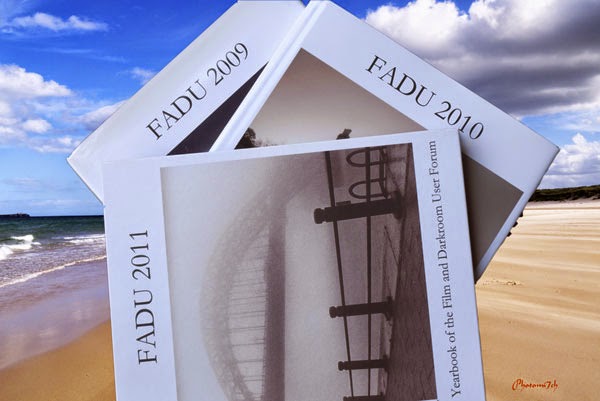 The year book is out.

Hopefully this is the start of a new era of year books from the film anddarkroom users forum (FADU). Earlier in the year Ian a member of FADU expressed his desire to have the year book started again and enquired if any of the other members would be interested in taking part. To his surprise there was a ground swell of enthusiasm for it to be reinstated. A boost to its reincarnation was Les Mclean's offer to curate and edit the book on behalf of the members.

This is the first book since Dave Miller the forums owner bowed out of producing the book back in 2012. There have been a number of calls by different members to get it going again but were not able to find anyone who had the time to get it off the ground. One of the main differences is that a number of members have gotten together to form a group to over see the submission process for the year book.

What makes this year book different from others, and the forum for that matter, is it's strict adherence to all pictures being scanned from photographs. Likewise for a picture to be included in the book, each associate was allowed to submit up to four photographs no larger than 8 x 10 in size. To be mailed to the submissions member no later than the end of October. They were then sent on altogether to Les Mclean for editing.

Another good thing about the submission process for the book was any member no matter what his or her level of experience, was invited to take part. I have to add that FADU is a very friendly welcoming forum who's members are always very willing to share their knowledge no matter who or where you are in your analogue journey.
So to the 2014 edition of the year book, i have to say there is a wonderful selection of photographs reproduced in the book. In the end, nineteen FADU supporters provided work for inclusion in the book. Not as diverse as previous years editions but a good number to start things going again. Of the seventy six photograph’s entered forty have been chosen. Representing all genre of photography.