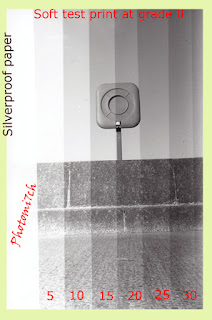 Split grade printing will work with all multi/variable grade papers whether resin coated or fibre base. But will it? Silverprint a London based company produce a limited grade paper that is very cost affective but is only produced in small batches.


Silverproof paper is still classed as a multi grade even though it does not have the full range of grades of the major manufactures. The paper is marketed as a proof paper for contact printing. Which I initially used it for. Until I up graded my processing tank to a 16x12, it was the only paper on the shelf of the right size to give this new bit of kit a workout! ( mentioned in an earlier post). It was then that I discovered it was more than a proof paper. I liked the tones it produced; admittedly these were graded prints. 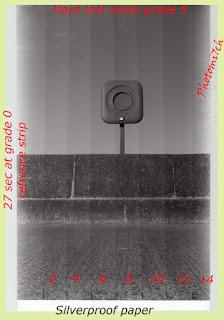 After spending sometime getting to know what the paper could do at different grades with dodging and burning (some hundred sheets later); I started to play with the idea that it maybe possible to use the split grade method with Silverproof paper. The next time I was in the darkroom I set about testing the idea. Before I started I had to make my mind up as to what grades should be used with this paper. I settled on the basic method (as described in an earlier post) of using grade zero and five as a starting point adjusting the grades if necessary. 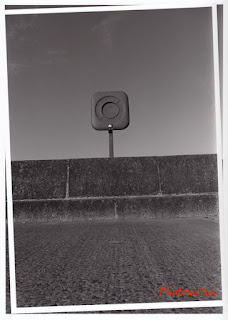 With the soft test print floating in the holding tank, I had to study it carefully when looking at the segments - it looked like a standard grade test print. I did wonder if this would be the case. Unperturbed by this I looked to the highlights and made a decision to expose for 27 seconds and then changed the enlarger settings for grade five. I felt that I needed to carry the test to its conclusion to be sure that the split grade method would not work. Fifteen minutes later the hard test print was floating in the holding tank. It was quite difficult to see the degrees of contrast between each segment making the decision to choose 12 seconds a educated guess. Looking back it was not the best subject to use for the first test, as the light was striking the scene head on. 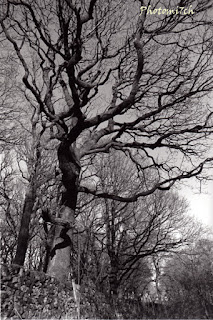 Once the print was developed I studied it against both the test prints and felt that the split grade method had worked well enough for me to go forward with a second negative. This time the highly contrasty negative of the trees was used. With this picture it was easy to see the split grade method at work. I was almost side tracked by the amount of contrast the longer timed segments were indicating. I had to remind myself it was about tonality and chose accordingly.


When using this method with Silverproof paper you need to choose the negatives you wish to print on the paper with care as it can be quite difficult to see an advantage over straight grade exposure.