XP2 super is pulled in to the darkroom screaming

On the frontier of a new discovery in the darkroom A bit dramatic I know but that is how I felt. All rubbish, I'm not the first to travel this route. It is new ground for me and this time I have left the research alone.

With no preconceived ideas as to what was going to happen. I'm free to experiment. The first and most noticeable problem is the colour of the film base. Will I be able to set the grade of paper I want?

Before the film got anywhere near the darkroom I found my old Ilford multigrade filters and looked through them to see if the film base had a close relation. It is lighter in colour to filter number four in the set but will it interfere? I did try to duplicate the filter grade on my colour enlarger the closest I could get was what I set for grade three and that was darker.

To stop the speculation I contact printed all the film using white light at two seconds with the lens fully open. These are some of the best contact prints I have had, nicely toned and detailed. I was not expecting that!

The results I received plays into my assertion that multigrade papers can produce well toned prints without filtration. That's not quite true in this case as the film bass is close to the shade of one of the multigrade filters.

Here is a thought, if film base was the colour of a particular filter would all the negative on the film print at that grade? And would you need graded filters any more? There's something to ponder while you develop your prints. If you have any thoughts please share.


Where was I hum! Yes the results of course. The difference between the white light and grade 3 print? In short not a lot if you did not know which was which you would be hard pressed to tell but there is a subtle one it shows as an increase in the strength of tone and a slight uplift in contrast.


I was expecting a difficult time in getting good results because of the colour of the film base. This is partly because of what others had suggested when they had a go at printing. In fact I have found so far it very easy to print the XP2s negatives. I think if anything the tint of the film base has enhanced the results.

If we go back to when the film was exposed it was a very bright day with lots of contrast and if this had been a normal black and white film the contrast would have lead to a grade zero when being printed. Instead the prints have been at my normal grade three. Thinking on what others have said it leads me to believe that XP2s under represents contrast levels which would explain the flat looking prints when used normally. To counter this I would suggest using a harder filter grade and or Kentmere RC to lift the contrast to a better level.

Back in the darkroom getting sharp focus was difficult. The grain seen in the focus finder is very fine and the window of sharpness is very small unlike traditional film emulsions. What I mean by this is when turning the focus wheel on the enlarger the grain of the film sharpens If you keep turning it stays sharp for a few degrees of turn and then go's soft. With the XP2s it go's out of focus almost as soon as it is sharp. 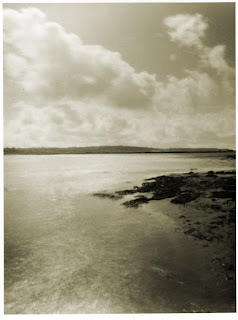 I did try other grades of filter to see if they worked they did but made the picture look muddy and very dark. Under normal circumstances I would interpret this as the the wrong grade being selected and or over exposed.

In answer to my question Will I be able to set the grade of paper I want?
No! I am of the impression that the colour of the film base plays a part in the amount of contrast the paper displays. I have not really forced the issue because the level of contrast I'm getting is to my liking. But you may know differently in which case please share.