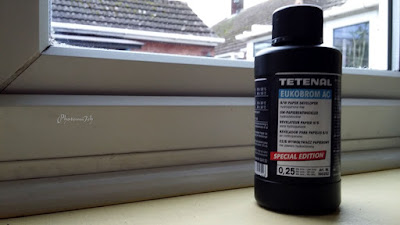 I like trying new things out in the darkroom, so when an offer to use Tetenal's new monochrome paper developer Eukobrom AC came up I jumped at it. I would like to thank Matt of AG Photographic and Tetenal for the chance to be one of the first to give it a test drive. A few weeks later a package arrived at the door, since then I have been chafing at the bit to try it out.

This is a new developer made for twenty first century. It is also the first commercially to use isoascorbate, vitamin C (you're not seeing things) as the main developing agent, it is a direct replacement for Hydroquinone the most widely used ingredient in photographic developers, noted for it's fast action and high contrast. It is marketed as the alternative to Ilfords multigrade all purpose paper developer producing the same sort of neutral tones. The developer works with both Fibre Baryta and resin coated light sensitive papers, whether multigrade or graded.

The data at the moment is quite sparse.

All information is provided for guidance only. Deviations may arise,
depending upon the paper used. Shortening or extending the development
time by up to 10% is possible.

In to the Darkroom.

The first thing you notice with this developer is it's lack of odour. The next is the colour of the liquid, a rich yellow. I decided to dilute at 1+9. Once done I poured the contents of the measuring jug into a tray. I would have used my up right paper processor but that already had fresh Ilford multigrade in it. Using the tray for the new developer would allow me to note how long it took for the image to start appearing.

I have several makes of light sensitive paper in stock. I chose three, the most obvious Ilfords multigrade, Fomaspeed Variant 311 and Kentmere VC select gloss, all resin coated papers. I went to these first as they are reasonable quick to process and give an insight into how the Eukobrom will perform. Before moving on to FB papers. (results to follow in another post)

I chose a negative from a recently developed set of Agfa APX100. I set the height of the enlarger so it would produce an enlargement of 9 x 12 then set the easel to 8x10. I did this because the Kentmere paper I wanted to include I only had in 9x12, this would keep everything consistent.

The test strip was processed in the multigrade developer and it was indicating that the image would need to be dodged, if I wanted a picture I was happy with. I set the enlarger as follows lens F8, grade 3, exposure: The whole image was exposed for twelve seconds, the sky from the bridge upwards plus eighteen seconds and finally the sky from half way up to the top of the image plus eighteen seconds. I would produce two pictures on each paper all at the same setting. The developers temperature was set at 20C.

Both developers are advertised as neutral tone. To me this means they are subtlety on the cool side.

The differentiation started with:

Once you understand that Eukobrom adds contrast to the image possibly more so than the Hydroquinone it replaces. It is easy to allow for by reducing the grade you would normally use. The blacks are wonderfully rich giving the pictures some real punch. The mid tones have more separation than Ilford multigrade but the surprise is the brightness of the whites.


Personally the main questions yet to be resolved are its keeping qualities and whether or not the image will be warm when the developer starts to deplete.


This is a nice developer to work with for prolonged periods as you do not get that developer smell lingering up your nose afterwards. Oh! It does look like OJ when diluted so keep it out of the reach of kids. It is a real gem and I will be ordering a bottle, it may even replace my favorite multigrade! Don't take my word for it try it for yourself you will not be disappointed.